PUMPkin researchers reached major breakthroughs in 2013 with a total of 31 peer reviewed papers and reviews published in highly prestigious journals. Three papers published in 2013 in Nature, Nature Genetics and Science, revealed a remarkable line of novel insight into the ion pathways, how they operate in the transport cycle, and how that helps explaining disease mechanisms that affect many patients. Thus, a paper on the crystal structure of the sarcolipin bound form of Ca2+-ATPase mapped the sarcolipin binding site and revealed how the transporter opens the transport pathway to the cytoplasmic environment (Winther, Bublitz et al. Nature 2013).
The same pathway and mechanism are affected in somatic mutations in Na+,K+-ATPase of adrenal tumors that were shown to change the pump into a leak channel that depolarizes the tumor cell membrane. The mutations therefore cause the cell to become constitutively activated for aldosterone secretion, leading to hypertension (Azizan, Poulsen et al. Nature Genetics 2013). Finally, the long-sought structure of the Na+-bound form of the Na+,K+-ATPase revealed the three Na+sites and provided new insight into the ion pathways and how they relate also to neurological diseases (Nyblom, Poulsen, Gourdon et al. Science 2013). This report was shortlisted by videnskab.dk as the research breakthrough of the year in Danish science. Among many other results, PUMPkin
research also revealed new ways of studying membrane proteins in lipid nanodiscs, a novel insight of the energy coupling of P-type ATPases and how proton pumps work. On-going proof-of-concept activities and industry collaborations translated fundamental research into drug discovery.

Fundamental to every living cell is that it needs protection from the outside world. All cells are encapsulated by membranes of lipid bilayers which form the barrier to the exterior environment or neighbouring cells. Furthermore, membranes inside the cell separate individual compartments and organelles. The exchange of signals and matter between the cell and its surroundings is ensured by pumps and receptors embedded in the membrane. An estimated 60% of the membrane by mass is protein and 20-30% of open reading frames of genomes encode membrane proteins - a large proportion of the cells resources are spent on membrane maintenance and function.

Using the energy from ATP hydrolysis P-type ATPases selectively transport a wide range of substrates including cations and phospholipids against their concentration and/or electrical gradient. These activities play a key role in life. At PUMPkin we study the P-type ATPases through interdisciplinary research ranging from molecular structure and function to physiological function in health and disease. The family can be divided into five, phylogenetically related subfamilies P1-P5, which are associated with different transport specificities and cell biological functions.
Reviews and book chapters published by the PUMPkin centre in 2013 can be found here (Lopez-Marques 2013, Mattle 2013, Bublitz 2013, Dach 2013, Tidow 2013, Reinhard 2013, Doganli 2013).

The physiological role of P-type ATPases

The ion gradients created by the Na+,K+-ATPases and Ca+-ATPases play key roles in a wide distribution of physiological functions in humans, including signaling and electric excitability, water and salt homeostasis, secondary active transport, regulation of cell volume and intercellular pH, as well as contractile processes, and secretion of hormones and neurotramsmitters. Many of the genes are therefore of vital importance to cell function, and even a partial reduction of activity leads to disease in many cases. Complete knock-out of these genes is incompatible with life.

The Na+,K+-ATPase maintains the net membrane potential and provides the driving force for transport of ions, neurotransmitters, nutrients, and drugs. A similar role is played by H+-ATPase in plants and fungi. Intriguingly, this key role of Na+,K+-ATPase and H+-ATPase in plasma membranes of animals and fungi/plants respectively must have evolved independently, underscoring the versatility and uniqueness of P-type ATPase function.

The role of Ca2+ as a mediator of intracellular signals (“Ca2+ waves”) relies on the interplay between Ca2+ channels and Ca2+-ATPases. The specific sarco(endo)plasmic reticulum Ca2+-ATPase inhibitor thapsigargin has thus developed into an indispensable experimental tool in the investigation of the role of Ca2+ as a secondary messenger.

The two human Cu+-ATPases are essential to copper absorption and excretion. Finally, flippases are differentially expressed in human tissue, and have been implicated in brain function as well as bile secretion. Current understanding of flippase structure and function is, however, only rudimentary, and they represent a new field to be explored with the anticipation of a large impact on the field of vesicle-mediated transport.

The P-type-ATPases are of pathophysiological and medical significance. Those in the plasmamembrane can be reached directly by inhibitors without prior passage of the cell membrane, which makes them attractive drug targets.

The gastric H+,K+-ATPase is the well-proven target in the treatment of peptic ulcer and dyspeptic conditions - one of the largest drug markets in terms of annual sales. Both the Na+,K+-ATPase and the Ca2+-ATPase are essential in regulation of cardiac contractility, the former being targeted clinically by the potent cardiac glycosides (digitalis). Gene therapy that increases the expression of sarcoplasmic reticulum Ca2+-ATPase has been used to alleviate cardiac insufficiency. Furthermore, the SERCA Ca2+-ATPase represents a potent drug target in prostate cancer treatment by use of masked thapsigargin derivatives as prodrugs.

Furthermore, P-type ATPases are attractive candidates for the development of novel antibiotics and antifungal reagents as underscored by the recent finding that the P. falciparum Ca2+-ATPase may be the target of malaria drugs in the artemisinin family. 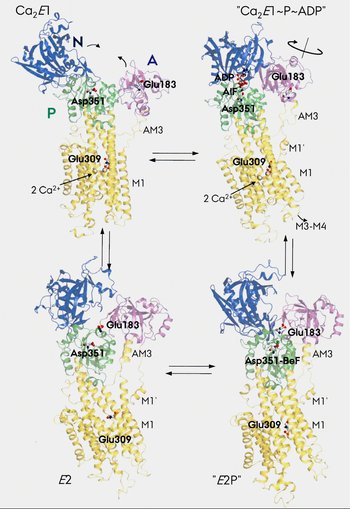 The Na+,K+- and Ca2+ pumps are prominent representatives of P-type ATPase and have been the cornerstones in the exploration of functional mechanisms of this transport family. A breakthrough in structural analysis was the publication of the crystal structure of the sarcoplasmic reticulum Ca2+-ATPase (SERCA 1a) in the Ca2E1 conformation by Toyoshima in 2000 showing a monomer structure consisting of three cytoplasmic domains (N, P and A) and a total of ten membrane spanning segments (M1 through M10) with two Ca2+ binding sites formed primarily by residues of M4 and M6.