New discovery from the molecular machinery for depression and addiction

Researchers at Aarhus University have described how a group of the brain’s transport proteins with important roles in depression and dependence overcome the step which limits their effectiveness. The discovery makes it possible to describe the full function of the transport protein and can provide better opportunities for counteracting the effect of amphetamine and ecstasy on the brain.

When nerve cells have to communicate with each other in our brains, it involves release  of small signal molecules, the so-called neurotransmitters, which act as chemical messengers in specific points of contact between nerve cells, called synapses. Here the released neurotransmitter is bound and registered by receptors at the surface of the receiving nerve cell. This will, in turn, trigger a signal which is sent on to other nerve cells. The circuits in the brain using the neurotransmitters noradrenaline, dopamine, GABA and serotonin are known to play an important role in mood, reward and mental well-being, and they also have a key role to in mental disorders such as addiction and depression.

After release of neurotransmitters between nerve cells, they must, however, be removed again to end the signal. This is done by a family of transport proteins which function as molecular vacuum cleaners in the cell membrane of the nerve cell where they pump the neurotransmitter back into the nerve cell for later reuse. This transport is of great importance to the signaling between the nerve cells, but happens relatively slowly. A collaborative project between researchers from Department of Molecular Biology and Genetics, Department of Clinical Medicine and Department of Chemistry has made it possible to explain what happens in the crucial rate-limiting step in the transport process for neurotransmitters such as serotonin, noradrenaline, GABA and dopamine which are all transported by related proteins with the same mechanism.

Transport of water-soluble neurotransmitters over a high-fat cell membrane is a complicated process which is challenged in the same way as the mixing of water and oil. The process is furthermore energy-consuming as the transport proteins have to work against a chemical gradient of already accumulated neurotransmitters inside the cell - just as it requires energy to pump air into a bicycle tube.  The driving force behind this neurotransmitter’s pump process comes from sodium ions which follow the neurotransmitter, but which conversely go from a high concentration outside of the cell to a very low concentration inside the cell. This means that the pump process is driven by the co-transport of sodium ions. For the same reason, it is essential that the transport process does not short-circuit due to sodium ions being transported without a neurotransmitter, or in any other way leak ions.

How the transporters move without ions and neurotransmitter

By solving the molecular structure of a protein closely related to these neurotransmitter transporters, which is captured  in a state during the reverse movement from inward-oriented to outward-oriented, it is now clear how the transporter solves the problem of moving without sodium ions and neurotransmitter. A centrally located and completely preserved element of transporters of this family is making a rotation which places this element in the empty binding pocket for neurotransmitters and distorts the binding sites of the sodium ions.  Biochemical experiments and computer simulations show that this enables the transporter to revert to the outward-oriented state and at the same time will not bind sodium ions before the rotated element has rotated back. In this way the transporter only utilizes sodium in the forward process and not while reversing this process. Furthermore, the researchers have shown that if this rotating element is changed ever so slightly, the transporter will not work properly and is unable to perform its function.

This new understanding of the mechanism of the neurotransmitter transporters gives hope for better opportunities for treating depression, overdose and addicition, as we now understand better how pharmaceuticals and drugs such as antidepressant, ecstasy and cocaine that bind to these transporters in different states must do so to ensure the right effect.

The scientific article has just been published in Nature Communications. 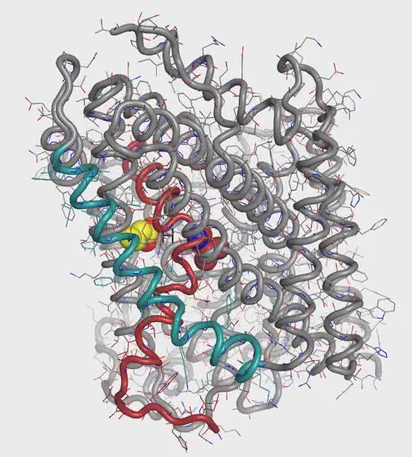 See movie with the description of the process (Movie: Lina Malinauskaite).